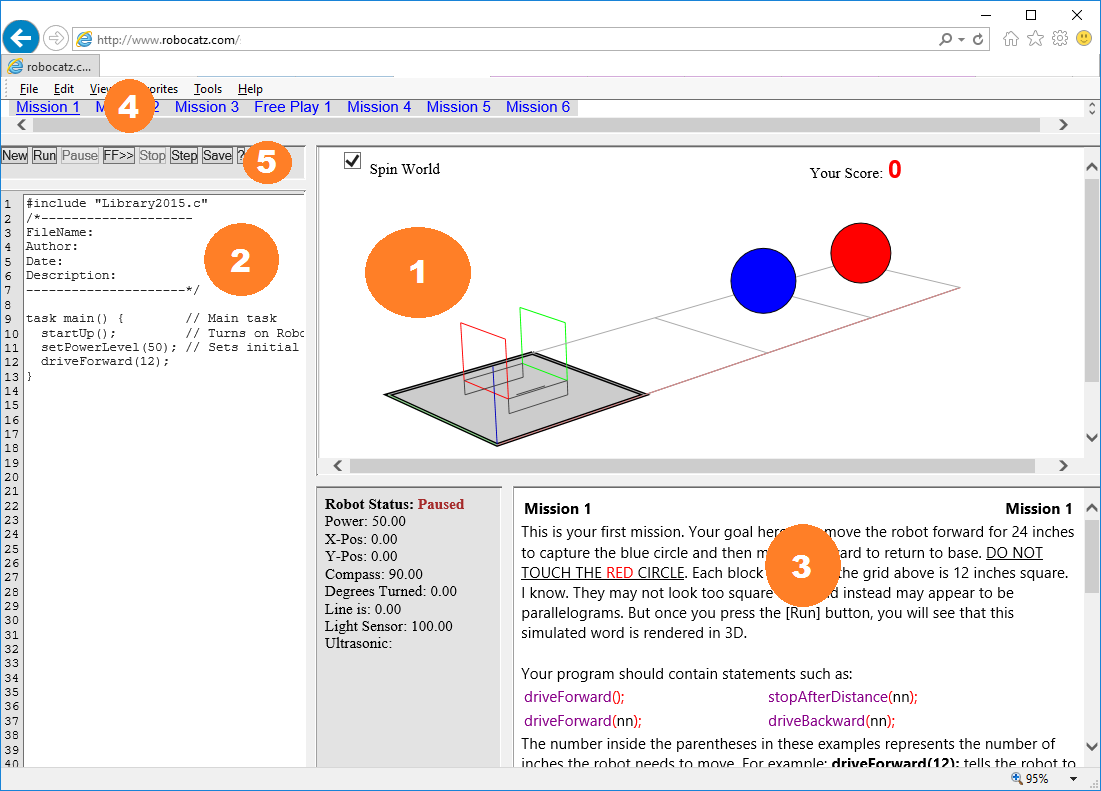 
The major areas of the Integrated Development Environment are identified by the numbered circles in the screen shot below.

Missions in the simulator are progressive in difficulty. The earlier missions are easier to complete than the later missions. Some of the later missions require specific strategies in order to successfully complete the mission. You can access a mission by clicking on the "Mission" link at the top of the screen (See #4 above).

Levels of Play and Locked Levels

There are three levels of play (Beginner, Intermediate, and Advanced). The higher levels are locked and can only be "unlocked" by completing all of the missions in the lower level. The Beginner level has three missions. So, in order to move to the Intermediate level, you need to complete all three of the Beginner missions.

In the "real world" when you tell the robot to turn 90 degrees, it may turn a little more or a little less depending on a myriad of factors such as: momentum of the robot, speed of the turn, friction (or lack thereof) with the surface, backlash between gears, complexity of the program (i.e., is the program telling the robot to do things in the background while it is turning?), configuration parameters, etc.

In the "real world", when you tell a robot to turn 90 degrees, it may in fact turn anywhere between 85 and 95 degrees (again depending on the conditions mentioned above). This simulator works in the same way. There is a "built-in" variability in the movement of the simulated robot. This is done to more accurately simulate how a robot would act in the "real world".

It is up to you, the programmer, to decide how to best address the randomness that may occur in the robot's movement.

Aligning with the Wall

One of the key strategies for dealing with randomness in the robot's movement is to "re-align" the robot to a known boundary (i.e., the wall). Using the wall to re-align the robot is a sure strategy for success in some of these simulated missions.

Demonstrate your skill in using this robot simulator. Complete 6 missions. This is a web based simulator. Go to our website to start it (or click the button below).