Many homes and business have an alarm system. Do you know how they work? All alarm systems have a "brain"--a small computer--that processes instructions from the user and monitors the sensors attached to it. Most alarm systems use an ultrasonic (or infrared) sensor to detect the presense of intruders. Additional "contact" sensors are located on doors and windows. Special sensors can be added to detect other parts of the environment such as temperature, humidity, flood, glass breakage, etc.

All alarm systems have use "states" (or modes of operation)to determine what actions should be taken based on sensor inputs. For example, one "state" may be called: Disarmed. In its "disarmed" state, the alarm system usually does nothing. However, when in an "armed" state, the alarm system will sound the alarm if unauthorized intrusion is detected. Getting from one "state" to the next, remembering which state you are in, and providing an interface for the user all require some amount of programming. The experiment on this page shows how the NXT-G can be programmed to perform a basic home alarm system. 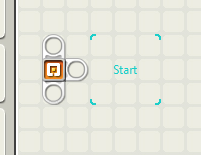 Figure 1
This is an expirement in the capabilities of NXT-G to implement multi-threaded (event driven) applications. The NXT-G software alows for multiple loops to execute at the same time at different sequences of the program "beam". When a new NXT-G program is started, notice how the starting point allows for three separate beams (see Figure 1). 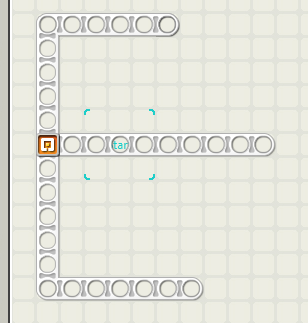 Think of the program as a sentence or paragraph that is read by the computer. The words are read in order from left to right and from top to bottom. This can be thought of as a "thread" that winds its way through the code linking the different statements in a specific order of execution. The computer is able to keep track of where it is in the program through the use of an Instruction Pointer.

With Multi-Threaded Programs, the computer has multiple Instruction Pointers where each points to an instruction on a separate thread (program sequence).

In NXT-G, a multi-threaded program can be easily created by dragging several sequence beams from the starting block. Then drop an infinite loop onto each. 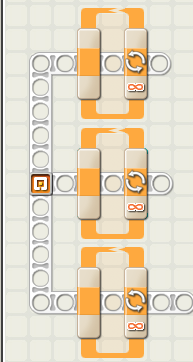 Our alarm system is composed of two touch sensors, one ultrasonic (motion) sensor, and one color sensor. The first touch sensor is attached to the door and detects when the door is closed.

Sensors and their positions

Procedures for Using the System

How the Program is Constructed

As mentioned earlier, the Mode variable stores the current mode of the system. There are three modes: Disarmed, Armed, Sound the Alarm. The alarm is sounded whenever the Mode variable equals the certain value used for sounding the alarm. In this example program, the mode for Sounding the Alarm has a numeric value of 4. So, whenever the Mode equals 4, then the alarm will be sounded.

Whenever the certain key color is presented to the color sensor, the mode will be set to "disarmed" and the system will say: "OK".

This is simple, if two conditions are met, then the alarm is triggered.

In order for the alarm system to be triggered, these two conditions must be met:

Putting It All Together

Connect two touch sensors to your NXT brick in ports #1 and #2. Port #1 will contain the touch sensor for the door. Port #3 has the Ultrasonic (motion) sensor. Port #4 has the color sensor.