Teams vying to give brawny robot a brain 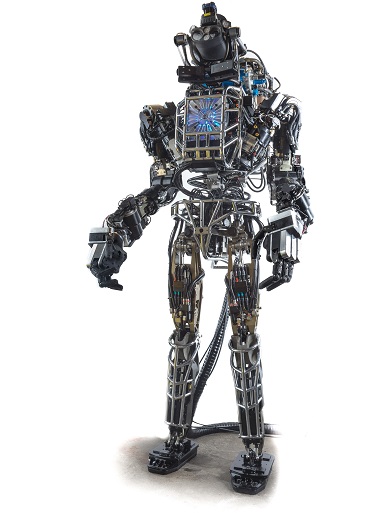 Its name is Atlas. And its brain is no match for its brawn. Teams from local universities have been picked for a competition to change that.

The man-shaped robot recently delivered to Worcester Polytechnic Institute is named Atlas, and it looks the part. It's 330 pounds of black and silver metal and over 6 feet tall.

And like its namesake, Atlas looks strong. It's easy to imagine Atlas's hydraulic arms smashing a flimsy wooden door to reach the humans cowering inside.

If that ever happens, the humans will probably cheer. Designed by Boston Dynamics, a Waltham company founded by MIT engineers, Atlas is intended to be a first-responder or rescue robot, working in environments too dangerous for humans.

"We're in the playoffs," said Michael A. Gennert, director of the robotics engineering program at WPI, one of the teams in the competition.

And so is the Massachusetts Institute of Technology in Cambridge.
"We're in this to win it," said Seth Teller, who leads an Atlas programming team at MIT's Computer Science and Artificial Intelligence Lab. 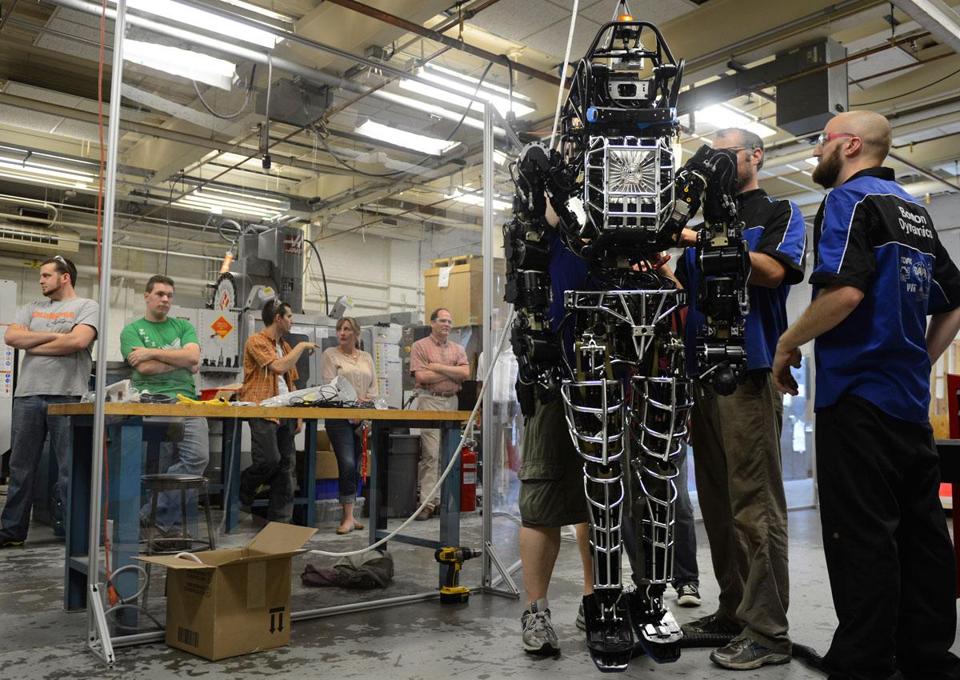 Missions to be performed during the contest: 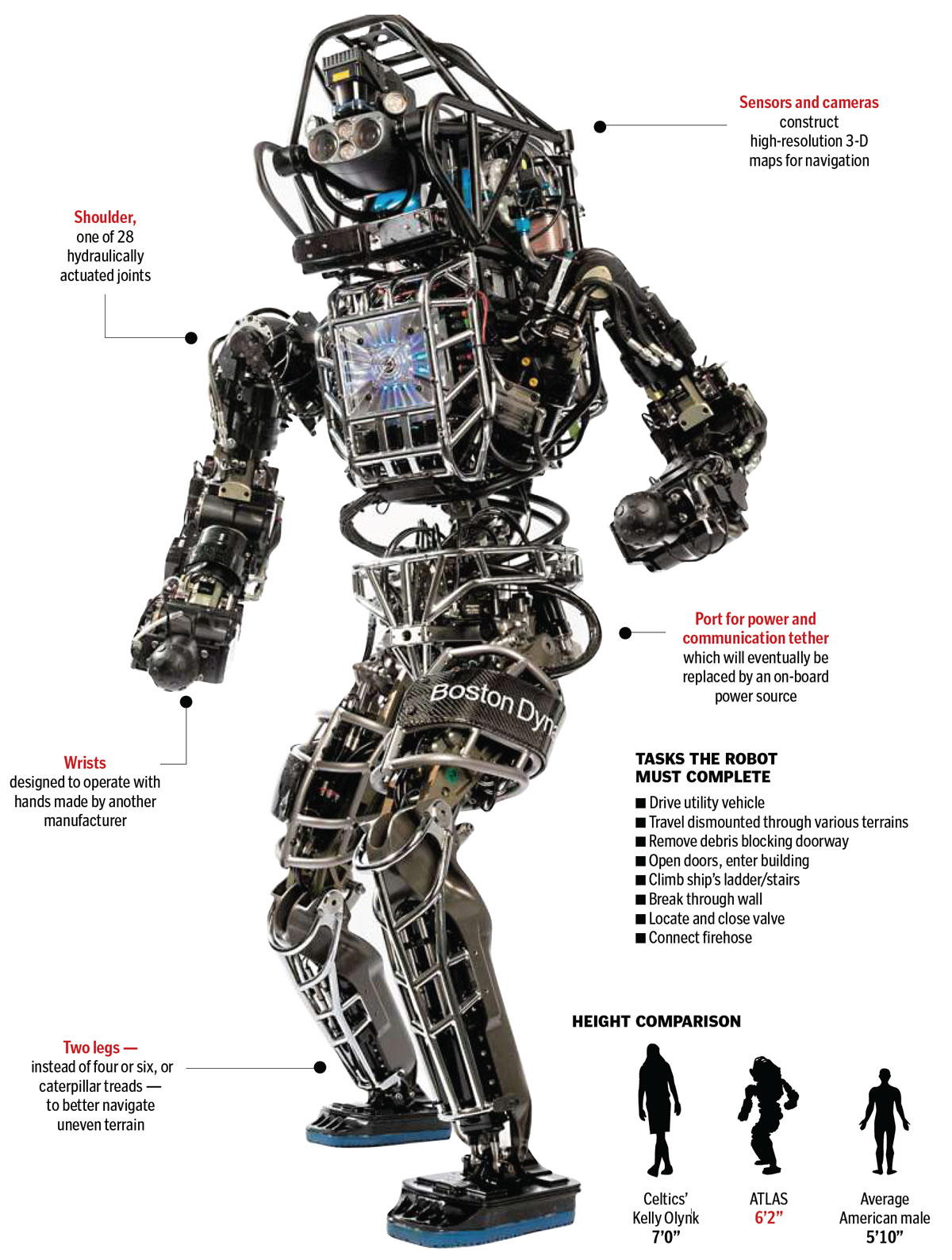 Click here for a larger image.
All this hardware and software is being funded by the Defense Advanced Research Projects Agency, or DARPA, the Pentagon research department that sponsored the development of the Internet.

DARPA and Boston Dynamics launched Atlas following the 2011 disaster at the Fukushima nuclear power station in Japan. Plant managers used tracked robots from iRobot to remotely inspect areas too radioactive for humans. But these machines couldn't reach parts of the facility that were accessible on foot.

"Those robots couldn't really do much more than look around," said Teller.

The iRobot machines ran on caterpillar treads. But Boston Dynamics cofounder Marc Raibert believes that for moving through rocky or rubble-strewn terrain, robots with legs are the best solution.

"They can go places where cars and wheeled and tracked vehicles can't go," Raibert said.

Boston Dynamics has built a small six-legged surveillance robot for US forces in Afghanistan and is developing a four-legged machine powered by an internal combustion engine and capable of carrying up to 400 pounds.

The two-legged Atlas is designed for rescue, not combat.
Many of the places where disasters might occur are places that are designed for people. 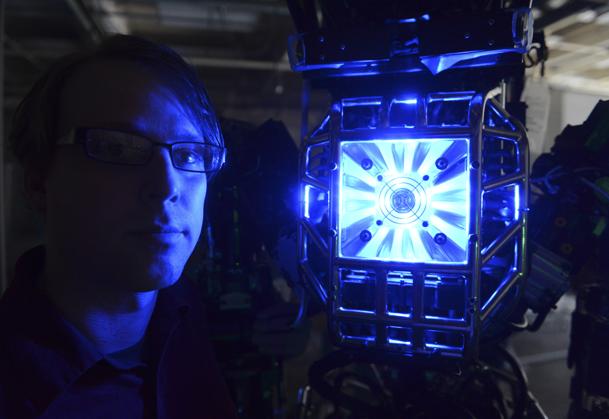 "Many of the places where disasters might occur are places that are designed for people," said Raibert. "People can fit in there and maneuver through them."

So too will Atlas, using the same tools as human first responders. A humanoid robot could climb into a car and drive itself to the disaster scene. Once there, it could open doors, climb ladders, turn valves or throw switches, just like a person.
People live in environments with stairs, ladders, doors, walls. People live in vertical structures--buildings with multiple floors and levels. A "Rescue Robot" needs to be able to navigate these places. 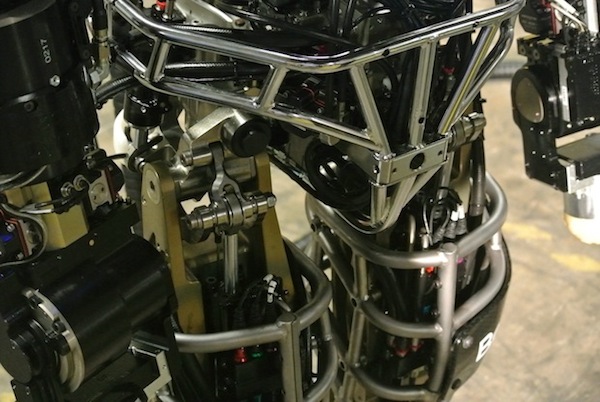 In December 2013, they'll go to Homestead, Fla., to compete against each other, and against at least six more teams building their own robots from scratch.

"We're moving from a simulated world where everything is neat and clean to a real physical world, which is apt to be messier," said Teller.

All the teams will tackle a series of challenges. For example, each robot must drive an emergency vehicle, climb a ladder and traverse a catwalk, stop a fluid leak by closing a valve, and connect a firehose to a water source.

The robots won't work independently; they'll be tethered to electrical power cables, and controlled remotely by humans. But the testers will deliberately interfere with the communication signal to simulate an environment with poor radio reception. Teams will be graded partly on how well their robots overcome this handicap. 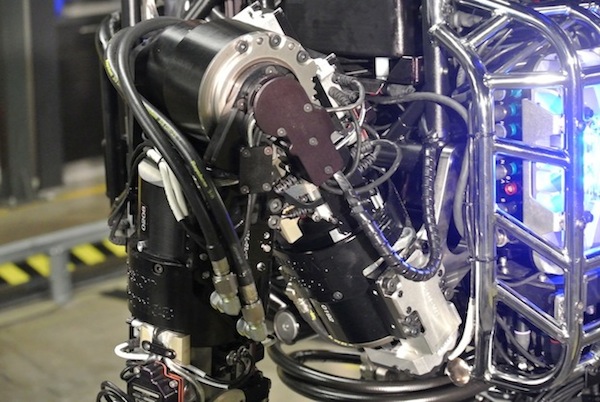 The top-scoring teams will qualify for the finals, to be held in December of 2014. By then, Boston Dynamics expects to be able to provide a generator module for each Atlas, which will eliminate the electrical tether and allow the robot to walk freely. And again, the machines, controlled only by radio commands and built-in software, will be given the same eight tests, with $2 million for the top performing team.

Despite the high stakes, the various schools have worked together, sharing ideas on solving tough problems. And the WPI and MIT teams seem determined to keep it classy.

MIT professor Russ Tedrake praised the Worcester team for beating his squad in the preliminary round. "I think they did an amazing job."

For Linton, it's not a matter of money or bragging rights.

"What this is about is pushing technology and advancing the state of the art so we can save peopleâs lives," he said.