There are three types of turning:

In a Point Turn both wheels turn. However, they are turning in opposite directions. The wheels will trace a circular path in which the diameter is equal to the distance between the wheels. 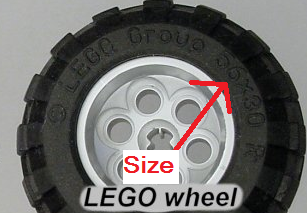 There are a couple of ways you could determine how many rotations of the wheel is needed:

You can determine the number of degrees to turn using simple Algebra. Divide circumference of the wheel into the product of PI times the distance between the wheels. 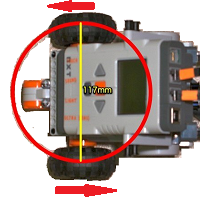 Let's take a look at a working example. If the distance between the two wheels on your robot is 117 millimeters, we can then multiply that number by PI (3.14159) to get the number of millimeters the tires will travel on the ground to get the robot to make a complete circle: 368 millimeters. If each tire itself has a diameter of 56 millimeters, then we know that each tire will travel (56 x 3.14) 176 millimeters when the tire makes one complete rotation on its axle. Therefore, it will take (368/176) 2.1 rotations of each axle to make the robot make 1 complete turn.

If you are programming in NXT-G and you want to make the robot perform a point turn, use the "Move" block and slide the steering pointer to the left or right side (see image). Then enter the number of rotations or degrees for each wheel to turn.

Using the Move block in this way to make a point turn is very simple and is often used by students who are just learning about robotics. If you are competing in FLL tournaments and wish to show your skills in programming, you may want to try using MyBlocks to allow you to more quickly develop programs and harness the power of the programming language.

A MyBlock is a subroutine (or function) written in NXT-G that enables you to store/execute a variety of actions or programming steps within just one (user defined) block known as a "MyBlock". An example of a MyBlock for a Point Turn could be: 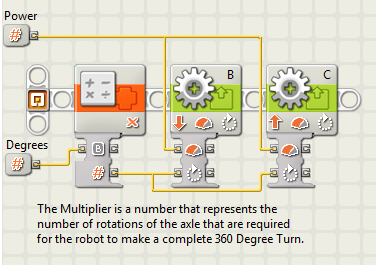 In this example, the MyBlock created has two input values: power level and degrees. The degrees entered here would be the degrees that you want the robot to turn. The MyBlock will multiple the input degrees by a "constant" (in this example the constant is 4.1) to determine how many degrees to rotate each wheel axle. Notice how the arrow on the B-Motor block is point down while the arrow on the C-Motor block is point up. This means that the two motors will move in opposite directions.

In RobotC you can synchronize the two wheels even if you want them to move in opposite directions. Just set the Turn Ratio value to -100 as in:

In the above example, the distance of each wheel to the center of the robot is stored in a single variable. You need to multiply this by 2 to get the diameter of the large circle that the wheels will make. 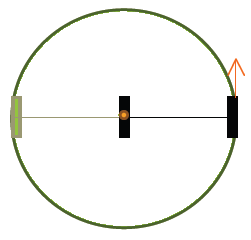 In a Swing Turn ONLY ONE wheel actually turns. The other wheel is stopped completely. In this case, the wheel that turns will trace a circular path in which the diameter is equal to twice the distance between the wheels. 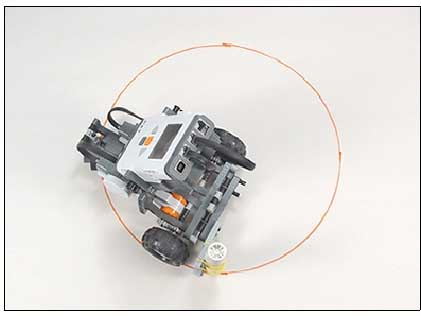 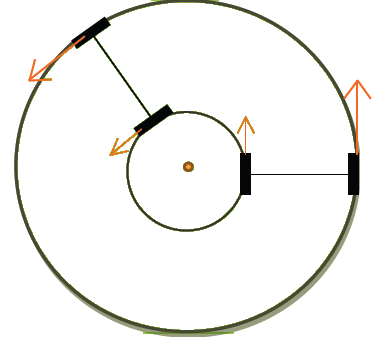