The goal of the Learning Locomotion Project was to use machine learning techniques to create autonomous control software for a robot quadruped such that it can traverse unknown rugged and complex terrains. As experimental platform, the LittleDog robot was chosen, which is about 30cm long and 20cm high, with three degrees of freedom per leg. The specifications for the project required that the robot should achieve a speed of at least 7.2 cm/s and climb over obstacles up to 10.7cm (for humans, this would correspond to obstacles of 50% body height which are traversed at slow walking speed). For additional information, follow the link to this article and the official project website.

DARPA Little Dog grant.
The goal of the Learning Locomotion project is to program a small dog-like four-footed robot to find its way at a speed of more than 7.2 cm/sec over six different sets of obstacles and rough terrain using machine learning techniques.

More generally, according to the program's vision: "Large, irregular obstacles such as urban rubble, rock fields, and fallen logs present minor challenges to dismounted forces, slowing but not stopping them. These Slow-Go areas for dismounted forces are No-Go areas for today's small unmanned vehicles, limiting their effectiveness on the battlefield. Enabling future unmanned vehicles to traverse large, irregular obstacles will allow robots to better contribute to military operations."

"Of course, rough terrain can also be found in many daily life scenarios," added Schaal. "For instance, a disaster site, a kids playground, or even a toy-cluttered room in a daycare center is currently not suited for existing robots."

USC competed with CMU, IHMC (Florida), MIT, Stanford, and UPenn in monthly tests at on terrains the teams had never seen before a government site.

The test was of the control software.The Little Dogs were standard and identical; the experimental setup was identical between the teams' labs and the test site so that it was possible to exactly compare pro-gramming approaches. After three years of research, only four teams â including USC â could cope with DARPA's final test scenarios. 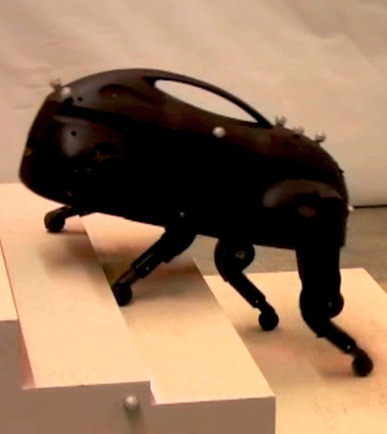 Little Dog
Crucial foothold learning component: in which the human user gives a demonstration of the best footholds in a given terrain. Using machine learning, the robot then generalizes this information to other terrains to navigate them without specific instructions. This research will ultimately allow robots to be taught by humans and then autonomously improve their behaviors by themselves.

Applications may include assistive robots that work in normal human environments, disaster area rescue, and âsmartâ prosthetics. The dream is to take legged locomotion outside the predictable lab--itâs just not useful yet. Walking is a very misunderstood thing.